Stormsteel Industries presents this Modular Hangar Kit in a very unique building style: Science-Fantasy. Bring some of that fantasy flare to your hangar or showroom with this Voxel Set. To see the kit in person and what it can do, VR to "Lightning Bay". Stormsteel's new personal build hangar and Showroom is being built here using this kit! Come see for yourself what it can do. Blueprints can be bought from a Dispenser in the Hangar at ::pos{0,2,2.8614,168.9045,15.3444} on Alioth. Don't be afraid to contact Stormsteel on Discord via his chat channel on the DU Creators Discord Server. 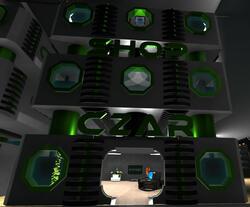 Transportable pop up shop. XS Dynamic core set up with 12 dispensers. 6 on each floor. 3rd floor is for storage and with a XS landing pad on top, land right there to take care of business. Customized lettering because you're all not as Czarish as I am :) See it up close at District 6 Market on the edge of the innermost landing pad. 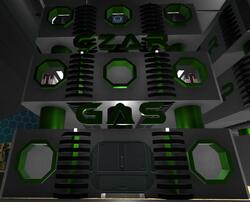 It's a gas station. Pop it up on those out of the way outposts to ensure you have a supply of fuel to get you around. Set up for Nitron and one of the Kergons. Put some ores in and watch the fuel come out. XS Static core. Contact me for Blueprint, dispensers not set up yet.

This Large core static landing pad from Polaris Aerodynamics is perfect for any base setup, spanning the full core it's perfect for landing those heavy deliveries on.

DTower short for Dynamic Tower is a full sized Dynamic L core landing pad based on a tower structure. Purposefully built with a simplistic view in mind for maximum practicality and to keep at a minimum to allow for flying potential and further development. It has an internal control room floor with full 360 degree views from stacked L glass panels and a separate huge private container storage area with some linked hubs (4 x L containers) to the control room to get started. Perfect place for a bar and a boardroom meeting! Because its built on a dynamic core you can deploy it on unoccupied territories and move or maneuver it easily. It's also easy enough to add AGG (Anti Gravity) to hover way above ground level or even add some engines and wings and fly it anywhere. Great way to have a base that is only accessible by air. All entries are protected by manual doors for security and exits automatically opened for ease of use. This could be used a base/landing pad/supply outposts or as a moveable trading platform. Anything really as it moveable or get ready for PvP Territory Warfare with this moveable defensive structure! For a small fee happy to make any modifications to your required specifications and can boost the structure to L5/5 containers. Dispenser located Teoma ::pos{0,8,-9.7639,105.5102,591.1175}

Tired of living alone? looking for a place to call home? Well, Aquarius Enterprises has your solution! we proudly Present our Apartment Complex Facility at the Republic of Nova Atlantis! At Nova Atlantis, you can grow your business, interact with other players like yourself, and live 18 KM near Alioth Market 6. Nova Atlantis is developing both its business and residential sectors. In this S core apartment, you will have the cozy feeling of home in Dual Universe. Enjoy the serine view from the complex overlooking the ocean. set up a res node just incase. store materials or even invite your friends over for a party or stay over for the night! You already have a base, no problem, why not have a second or third one with us! Nova Atlantis has a Tower-less Elevator Port Accessible from the ground and 100KM up to Port Aquarius. Buying this apartment gives you access to businesses, trade centers, hangers, orgs, players and more! Buy today for 750,000 Kh Nova Atlantis is Waiting! Note: Property tax and others are enforced by Nova Atlantis.

PYRAMID STORAGE ROOM: DONT WANT TO LINE UP 100 CONTAINERS? DONT WANT TO MESS WITH SCREEN LUA? THIS MIGHT BE THE THING FOR YOU! 100 L CONTAINERS PERFECTLY STACKED AND LINKED IN STACKS OF 10 TO HUBS WITH CONTAINER MONITOR LUA. ONLY 1MIL QUANTA ENJOY!

PYRAMID SHIP PARTS FACTORY: A SHIP BUILDER'S DREAM! MAKES EVERY SHIP ELEMENT EXCEPT ENGINES ENGINE FACTORY COMING SOON ALSO MAKES PROGRAMMING BOARDS AND DATA BANKS HAS EXTRA ASSEMBLY LINES TO ADD YOUR OWN EXTRA PARTS THIS FACTORY IS A BEAST! DONT MISS OUT! OUR SCREEN FACTORY IS A GREAT COMPLIMENT TO THIS FACTORY LIKE ALL OUR FACTORIES; COMES WITH: INGAME AND DISCORD SUPPORT. ALL MACHINES ARE LABELED TO MAKE SCHEMATIC PLACEMENT A BREEZE. ALL CONTAINERS ARE HUBBED TO MAKE ADDING STORAGE CAPACITY A BREEZE TOO! ENJOY! CHECK OUT OUR BIO FOR MORE PYRAMID CO INFO

Updates modules with custom talents and ore prices! Dispenser Location: ::pos{0,2,-2.8662,-153.1689,26.9968} Token Weight: 0.7 T Token Volume: 162 L This is the central information component to all Warren Industries Factory Modules! Here you edit the Lua parameters via the "right-click" menu to update you talents and ore prices used in calculations for all your modules. The Data Center is fully compactable to pickup and place down next to the module you would like to update with new talents and ore prices. INSTRUCTION MANUAL IS INCLUDED ON EVERY BUILDING ON INFO BUTTON For info on how Warren Modular Factories work please see last photo Token price includes the blueprint, all schematics, and all honeycomb/parts needed to place factory down. Dispensers for "token" can be found at shop location. 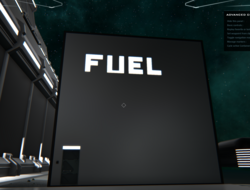 Stand alone Fuel factory, makes Nitron, Kergon, and Xeron fuels. Token comes with all schematics. - a great start for people who want to have a zero stress setup to make all their fuels.

Name: The Bold and Brash Width: 126 Voxels Height: 126 Voxels Date of Creation: 2021 Original Creator: Squidward J. Q. Tentacles VR: Bloodviolets Voxel Artwork This figure derives from a modernist aesthetic. He stands boldly in the center of the composition and manages to look both assertive and relaxed at the same time. As this is a self-portrait, the artist strikingly depicts himself nude, making him a modernist Adam. This figure stands in reverse-twisted perspective, and unlike the ancient Egyptians, his lower torso and legs are full-frontal to the viewer, whereas his shoulders and head give a profile view. This subject reveals to us only one liquid eye, as he gazes out of the picture. Is he afraid of what he sees? Perhaps his stance reveals that he is startled with the backward arch of his chest. The quality of the pixels and color palette of the background communicate both immediacy and antiquity. There is no ground plain, and so the background and the subject seem to seek the same space - and these shallow space conventions could make the figure appear assertive monumental, or... trapped? The ascorbic color combinations could reflect a Fauvist influence, but a more common art historical interpretation would be that of gold. If this background does indeed represent gold, then Squidward has made an icon of himself, bathed in the heavenly light. The visible eye of the subject gives the effect of the blankened stare, and perhaps this is indicative of Squidward's entire body seems to have gone slack at that which he is witnessing, and he is experiencing something profound. He is experiencing awe. The model's body color is a greenish-blue cast of cool. Does Squidward practice the Hindu religion? Perhaps the golden background will at some later point be melted down and fashioned into a gleaming peacock crown to adore his Godly head, which lays bare and bulbous before us. The back of the subject's head rounds into modeling shadow, and is darkened. This is the seat of Squidward's memories- memories which he would rather forget, as this is a forward-seeking Squidward, as evidenced by his eye direction and proboscis thrust. The swoop and swerve of the figure's outline are answered in the eternal constant background, and the unite together in a mythical dance of composition, form and color