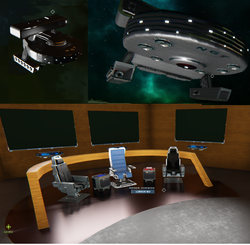 This UFO design is the perfect everyday ship for everything from a quick nip out to the market to a decent days mining with 3 full L containers. Look around the ship and get your blueprint today at the district 6 market ship shop. This ship is built for the individual who wants to get rich quick without flying a box. It is capable of 1.5kT lift off alioth, vertical takeoff unloaded, parachute at full load and 0km/hr to burn up in atmosphere (if you were still there!) in 10s... even fly it to space upside down if that's your thing? This design is extremely forgiving and fun to fly with 23.3 g of atmospheric breaking meaning you can stop dead on the spot when you spot a pesky space elevator. Space for a warp drive and radar ect. but not in the blueprint to save cash and let you customise. 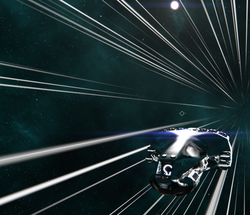 S-Core Hauler, T5 Placements, Fully Detailed Interior, Warp Core, Scanner Room, Crew Cabin + Head, Captains Cabin + Private Office & Head, Lounge, Jeffries Tube, Engineering. 5+ kT Confirmed off (and back to) Alioth This beautiful ship will pay for itself in one or two trips easily. Mine in style!! If you really wanna impress your friends ask about the OMG GOLD Edition! (Serious Inquiries only!) VR to "D4nkworks OMEGA Hangar" it's parked and ready to be checked out in person! ::pos{0,2,7.7770,79.9968,85.3812} for pickup Contact me to arrange a trade in-game! Sales Hangar now located at Infinity Spaceport! IGN: D4nkkn1ght https://discord.gg/uUx47tR @ me in the #PocketRocket Channel Dank#9076 twitch.tv/d4nkkn1ght

This Hovercycle is fun, and fast. It also hovers anywhere in atmosphere. Designed to replace my "rescue" ship it is quite capable. A skilled pilot should be able to do tricks with it! After some sales I will certainly be sponsoring races with the Butterfly, get yours and support my cycle building habit! Come see the most current version(s) at VR: Primus Client Parking. I have been 1999Kph in atmosphere flight-testing with no burn damage at all. 17t wet weight. M Rare atmospheric engines. Buttonhud installed. Atmospheric S radar because friends don't let friends fly without radar. Stats are in pictures. Thank you for considering your next ship purchase from Primus Ship Company. VR: Primus Client Parking 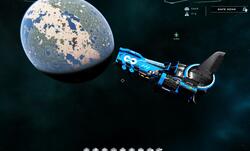 A fuel efficient infraplanetary hauler with great handling, carrying up to 2.5kt.

* interior work in progress * # 30% off * + upgrade to completed. Limited run! Only 5 being made / blueprint token. Unparalleled full scale replica using hologram vertical scaffolding inside and out ! Don't even ask how long its took to design the interior archways! An extensively modified Corellian light freighter, the Millennium Falcon is a legend in smuggler circles and is coveted by many for being the fastest hunk of junk in the galaxy. Despite her humble origins and shabby exterior, the ship that made the Kessel Run in less than 12 parsecs has played a role in some of the greatest victories of the Rebel Alliance and the New Republic. The Falcon looks like a worn-out junker, but beneath her hull she’s full of surprises. A succession of owners, including Lando Calrissian and Han Solo, have made special modifications that boosted the freighter’s speed, shielding and firepower to impressive – and downright illegal – levels. The price of such tinkering? The Falcon can be unpredictable, with her hyperdrive particularly balky. Despite her flaws, she’s beloved by her owners.

The K1X Raptor is the newest XS Core PvP and Personal Transport ship built by Koriandah. It is a sleek and aggressive light fighter made from Aluminum, with Gold Armor surrounding the Core for maximum protection. Featuring two wing-mounted XS Cannons and 6 XS Containers, you can rest assured that after blowing up your prey you will be able to fit all the loot into the ship and take it home! The K1X Raptor also includes downwards-facing space engines to ensure full compatibility with all lua basic-space autopilots. Remember that if you prefer other weapon types, you can always mount them instead of the XS Cannons to configure the K1X Raptor to your liking! Why a Black and White colour scheme? Because I feel that if I add more colour to it, say a red accent colour, it can lull some people into thinking they cannot change it to their liking. I leave the K series as black and white because I want people to be able to add accent colours that they like, and not be subconsciously convinced that there is only one possible colour. Contact Koriandah#0889 on Discord if you would like to purchase your very own K1X Raptor and shoot defenseless ore haulers in style.

There comes a time when reasoned words of appeasement are no longer enough. A time when a good person must decide whether to keep taking the hits or to stand up to oppression.   When it is time to stand up, to choose freedom and prosperity, then they must be prepared to deal in malice and menace. To deal in violence.   This moment calls for them to pick up the tools of war, and to prepare for battle. Then it is a time for the Megalodon!   From the abyssal depths of Captain Miller’s mind arises this 120m long armored behemoth. It is an instrument of retribution. It has been created to let haulers, miners, and business people bite back at those who target them!   It screams in an ancient, prehistoric, voice “stop hitting me Devon!..,” (Captain Miller has never confirmed who Devon is!).   Born of political necessity when The Guild of Merchants and Haulers threatened to boycott delivery of ore and essential goods until their pilots were adequately protected.   When word of this reached the ears of a conglomerate of Helios's finest leaders, known as the Council of Business And System Traversal Advisors, Regulators, and Directors, they knew they had to act!   The Council quickly ruled out paying to establish a Helios Sector Police Force or restricting arms sales throughout the system – as both were deemed bad for business and potentially expensive! Instead,  the Council awarded a multi-billion Quanta contract to Captain’s Customs for the development of Hauler capable of fighting its own battles! Once he was done counting the suitcases of Quanta, Captain sequestered himself into his design office, stared at an aquarium in the corner for a week, jumped up, and screamed “Shark!”   What emerged from this process was a monstrosity – The Megalodon. With 7XL Expanded Containers and an M AGG, it is a hardcore hauler. With a fully protected "safe room", 4 Advanced Precision Large Railguns, and 10 Military XL Space Engines, it is a feature-complete war-ship designed to get you safely through any zero-security zone.   If you are serious about hauling and want to cast off the fear of piracy, it's time to be the biggest, baddest thing in the ocean! It’s time to jump the shark and go Megalodon!   Come see it in person at Captains showroom 15km south of Alioth District 7 ::pos{0,2,14.2029,102.3581,0.0000} or visit Captains Customs in VR.   Captain’s Customs Now Sponsoring Space Shark Week 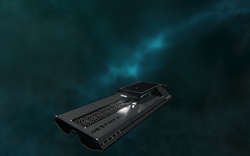 MK1L: This ship has a large cargo container and only XS cannons. it can carry about 250t out of alioth and had no problems with about 500t in atmosphere. Max ship speed is about 900kmh MK1M: This ship comes with M container and larger wapons,M Cannon and M Railgun. i have not tested hauling with this ship so i dont know how much tons exactly it can carry to space. Both versions have a bit different interior. A surrogate pad and a ressuraction node is installed in both of them. 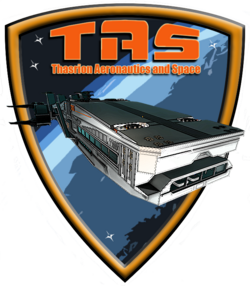 ATTTENTION!! Summer Blueprint sale! Some ships are up to 50% off. Thasrion Aeronautics and Space presents the TAS 16 Ulysses mining/Scanning/freighter vessel. Capable of scanning 3 titles at once. It brings style and hard work in the same package. Can house a crew of 8 on those long mining missions. Please visit my VR POD @ TAS Show Room to get a close up look on Alioth. ::pos{0,2,50.2754,117.5824,3.1484}