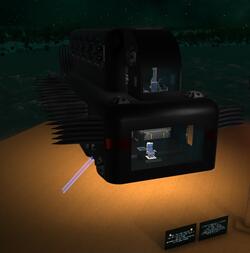 The MFH is a hauler for newer players. No glitches, no exploits, no bugs (sad it has to be mentioned). Due to its high amount of wings and low cross section it can carry very large amounts of cargo with its 6 maneuver engines while consuming very little fuel. I tested it on a character with no skills and could cruise at 1000km/h with 4kt cargo, orbit/offworld from Alioth was tested with 2kt with no skills but as this requires a very flat pitch, to keep speed close to 700, and more time, I set the cargo lift on this page as 1,6kt 8 L containers have space for 1536kl, by the time you ever run out of space when bringing stuff to the market, you can afford a ship 3 times the size. All items are max buffed, I only used max sized elements so you can strip it for parts when you want to build something bigger. This is a van, not a sports car. When you fly with a lot of cargo, keep speed high and only climb slowly. You should also make use of the wings and land like a plane. Do not just fly roughly to where you want to go and hold the brakes until you are on the ground. If you get the cargo plane feeling you will have a lot of fun with this craft, at least as long as you find enough stuff to fill the cargo with. It also excells at warping ore to alioth from off world, as it can land with a lot of cargo (I regulary use it to bring well over a million chromite back from sicari) while still being relatively cheap to warp. The interior is quite plain, buttons for doors/forcefields, lights, resurrection node and VR station. Say the word if you want some carpets and plants. Autopilots and assists work best with a lot of engines to start and a lot of brakes to stop, not a lot of wings to glide. So I recommend flying this manually. If you want to use autopilot, I can take 2 containers out for you and use the space for airbrakes until you have 60g. As this isn’t exactly an work of art and is meant to just help new players get an affordable ship that can carry a lot, you should almost break even if you sell the parts. You can also have basic engines to save 1.5M, but maneuvers need less fuel and spin up faster, I think they are worth it. Don’t get the warp if you dont need it, save another 850K. Visit VR "Showroom Gottchar" to see it.

Now Available in the Cobra Plus SB Model with all Advanced Military Engines for 49 Million to give you that extra OOMPH through PvP Space! New from the Forges of TTA Alioth comes the 'Cobra', a medium core Hod Carrier with looks that would make even a Preacher weep. Harnessing the latest in Gyroscopic Technology, the Cobra utilises no less than 24 Large Atmospheric Engines and 4 XL Space Engines to punch a hole through even the most demanding of planetary atmospheres to carry your precious cargo to safety. Load Capability has been measured with low piloting skills which are confirmed at 5KT in 1G. The finish, in Polished White Aluminium and Beige Aluminium, will have the crowds gathering to admire your choice of steed wherever you choose to land. Contact TTA (Tictaq Jim#7871) today to arrange a tour or hop in to 'Tictaq South' in VR

Compact and sporty, the Nomad MK2 is an Extra Small light hauler and personal transport ship, equipped for atmospheric and space travel. Built by Infinity Corporation and designed by Atmosph3rik. Equipped with two Medium and four Small containers for 240kL of storage, the Nomad can lift about 400 tons into space at 1g, with moderate piloting talents. And sporting two Large Space Engines, one Large, two Medium and four Small Advanced Military Atmospheric engines, it has power to spare. Also Includes: All T5 Piloting and storage Handling talents Rez Node Container hub S Atmospheric Radar S Space Radar Room on top to install a Warp Core, or Territory Scanner. (not included) Custom colors available on request and an additional fee. Specify two materials, one for the primary color and one for the accent stripe.

Infinity Corporation's first ship of our upcoming product line of freighters and haulers, the Behemoth 1A-S is a space-only super freighter. Armed with 8 Large Railguns and 2 Large Lasers, and armored with up to 7 meters of air-spaced armor in important areas, you can safely transport up to 7680 kL / 20000 tones through space with 40 Large containers. The Behemoth also (optionally) comes with 2 StarScream drop ships (extra 10 million quanta each) that fit neatly into the drop hanger in the bottom rear of the ship (See photos) Your tokenized ship will come with all elements upgraded to tier 5. The IC logos can be replaced with a logo of your choice, or just removed.

Second ship build, took about three months since I was (and still am) learning voxel stuff, but turned out quite alright. Primarily fitting the role of a long range exploration vessel equipped with scanning, hauling, and defensive capabilities, layered armour with strategic element positioning and a range of flight options giving the pilot the ability to perform with full loads in various enviroments via AGG, para-brakes, fixed wing flight and rocket assist for those accidental "oh shit" moments. Also comes with a hangar and an atmospheric vtol craft, as well as an internal command bridge and a separate first-person friendly cockpit for those of us wanting more FPV immersion. Not being mass produced :P Available for scenic tours, and hiding face huggers around the corridors.

The Krait MKII, inspired by its name sake from Elite Dangerous, makes for a great little ship in atmo but its real strength lies in space travel with 6g of space thrust base she’ll get you where you need to go in short time. Crash Industries are proud to offer the Krait MKII as a blueprint and Token, Both options now come with level 5 boosts baked into the BP so they will still apply even is a 0 handling skills character deploys the ship. For DIA members an ORC transfer is also accepted payment The ship can be viewed and Blueprints are available @ ::pos{0,2,2.0378,120.2779,41.4416} or VR into Crash Industries showroom Please contact 249/Aegaio/Let's#4052 or JackCrash#8991 on Discord for any sales inquiries

This flyer is a great replacement to the two beginner ships but also allows for space travel while still suitable for atmospheric travel. Very quick and maneuverable. Great for running small shipments and perfect for getting between the moons of a nearby planet. Works well with ground hover control configuration as well as flight control configuration.

My First Medium Ship design templated off of obj schematic. It is one of a kind and you have probably seen me around the markets as this is my all-around go ship. This one is decked out, but the earlier design follows the classic D5 look(available). I use the Antigav to float out of orbit if over 85% or greater capacity. It includes everything but a sink(Blah sinks for Klingons). It does have a pee corner (no urinal, just a spot for pee) as classic to Klingon's Ships. My favorite view when taking off out the water is frontal, reminds me of the water take-off in Star Trek 4 movie scene over that fishing boat. ~ Treky nerder-ing . Combat Layout: Medium Gunner Seat 2 Small Missile Turrets 2 X-Small Rails 1 Small Laser Cannon

A small core hauler capable of lifting 1KT of cargo on Alioth with little to no effort, or a party barge for you and your friends to explore an unknown planet or buzz the waves of Alioth. Fully equipped with military atmo engines. Boosted BP for 8M as follows: Atmo thrusters: lvl5 Vertical Boosers: lvl4 Atmo brakes: lvl4 Adjusters: lvl4 Wings & stabilizers: lvl4 Can be contacted via Discord at Floridaskye#8648

* interior work in progress * # 30% off * + upgrade to completed. Limited run! Only 5 being made / blueprint token. Unparalleled full scale replica using hologram vertical scaffolding inside and out ! Don't even ask how long its took to design the interior archways! An extensively modified Corellian light freighter, the Millennium Falcon is a legend in smuggler circles and is coveted by many for being the fastest hunk of junk in the galaxy. Despite her humble origins and shabby exterior, the ship that made the Kessel Run in less than 12 parsecs has played a role in some of the greatest victories of the Rebel Alliance and the New Republic. The Falcon looks like a worn-out junker, but beneath her hull she’s full of surprises. A succession of owners, including Lando Calrissian and Han Solo, have made special modifications that boosted the freighter’s speed, shielding and firepower to impressive – and downright illegal – levels. The price of such tinkering? The Falcon can be unpredictable, with her hyperdrive particularly balky. Despite her flaws, she’s beloved by her owners. 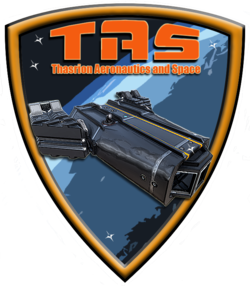 Thasrion Aeronautics and Space presents the TAS 28 Kerberos light freighter. Built for those runs to the market. Passengers for 2 of your friends and Org members. With 2 small cargo containers you can carry everything you need as a new player. Please visit my VR POD @ TAS Show Room to get a close up look on Alioth or make your way to my showroom in person @ ::pos{0,2,50.2754,117.5824,3.1484} Tokens available at request.