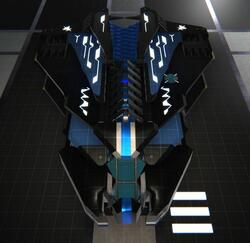 "Carrion" S Pocket Edition Elite Dangerous fans I have one for you. I squeezed what should have been a S core into an XS build box. Packed in neatly and made Purdy. This is POCKETABLE! Ship is using Custom Dimenica Hud and Damage report for screens. Has small living quarters and seats to bring friends with ya. Ship is over Engineered and flys fantastic. BEST OVERSIZED pocket ship in game and room for upgrades. Come grab ya one. VR Station name "BooNDocK Customs" @ Infinity Corporation Spaceport ::pos{0,2,7.8000,80.4210,89.9976} ****OR**** VR Station name "BooNDocK ShiPYarD" ::pos{0,2,-25.9879,106.3613,5.8710} IGN: xSKeeVx OR Discord: Skeev#3940 IGN: Bananer OR Discord: Bananer#0773 (SHOP PARTNER) Contact me for possible trades in partial payment. Willing to Barter ORE's, Component's OR Quanta.

"Stinger" FREE BP!! Made this lil fun agile pocket ship for everyone to to try and a good time in. Intended for beginners and hell of alot better then the starting ships. Ship is upgradable. Come grab ya one and look around a bit. VR Station name "BooNDocK ShiPYarD ShoWRooM" ::pos{0,2,-25.9879,106.3613,5.8710} 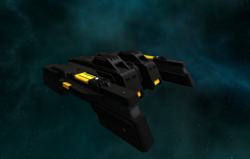 LOKI the God of Mischief.....time to keep the tricks and pranks coming... Armored space only hauler with large rail guns for protection. 40 containers with a shielded core and modules. Layered in steel iron and silver. Equipped with VR and surrogate pod 4 xl large ammo containers. Current spec for ships was made with 4 and 5 lvl skills so far. No lua installed to allow for custom Lua kit.

"Crescent" MK7 Personal Shuttle to travel the stars. This beauty will get you to Madis and Thades for only 2 Warp cells and a mere8 Cells for max warp. This can be converted to Lithium and lower that warp cell count. BP's set up for the RED or BLUE Variant. Im willing to do any color if I can make the voxels. Come fly some of the most unique ships in the game made by BoonDock Customs. Come grab ya one. VR Station name "BooNDocK Customs" @ Infinity Corporation Spaceport ::pos{0,2,7.8000,80.4210,89.9976} ****OR**** VR Station name "BooNDocK ShiPYarD" ::pos{0,2,-25.9879,106.3613,5.8710} IGN: xSKeeVx OR Discord: Skeev#3940 IGN: Bananer OR Discord: Bananer#0773 (SHOP PARTNER) Contact me for possible trades in partial payment. Willing to Barter ORE's, Component's OR Quanta. 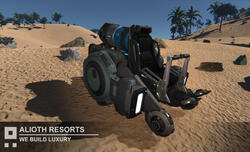 This luxury space wheelchair is the perfect mode of transportation around your tile or for site-seeing around our island paradise resort. Can be compactified to fit weightlessly in your nanopack. 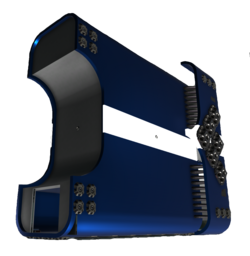 A heavy-weight warp hauler, designed specifically for running - and surviving - the new Aphelia missions! Rated for a base 2000T (1.0g), this vessel has not only the capacity, but the protection required to get your mission package to its destination. With a multi-layer armoured command deck, easily accessible and strategically placed elements, as well as an XS core ship-bay, this ship will make your mission running a walk in the park. All stats are given with no placement and day 1 pilot talents - stats will only improve with talent training.

An ultra-heavy-weight AGG / warp mining support vessel, with huge storage and a triple scanner array to find those all important meganodes! Rated for a base 10kT (1.0g) in 16 XL containers, this vessel has the capacity to support multiple operations in the field, before having to return to base. This ship is mobile operations base, with a expansive command deck & luxuriously appointed, multi-level living quarters. With easily accessible elements and an XS core ship-bay, this ship is the perfect frontline to your industrial empire. All stats are given with no placement and day 1 pilot talents - stats will only improve with talent training. 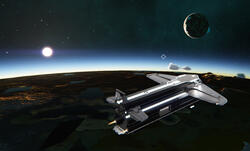 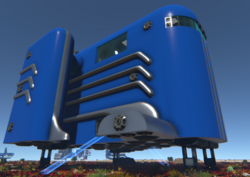 An atmospheric only small core heavy market hauler. It has 10 large containers and has been tested to haul 10 kt across Alioth. Its good for making market runs where you dont need to haul a bunch of space stuff with you, just a ton of weight. Comes with Arch hud and DU Damage already loaded. Tokens come with level 4 and 5 boosts. Can be viewed at the Chimera Shipworks Showroom.

My take on the Origin Jumpworks 300 series ship. Can come in multiple colors and has differing specs based on the layout you desire. Both layouts are compactable. Origin Race: Equiped with 2 x Advanced Military Atmo Mediums, this is the fastest of the group. Information numbers reflect this ship layout. Origin ER: This is the extended range version. It boasts a Medium Atmo Tank and 2 x Advanced Maneuver Mediums. While not as fast, the acceleration and endurance of this ship are second to none. VR in to check out the ships and drop me a DM on Discord to order yours today. Due to the color scheme choices, no dispensers will be set up. Prices can vary based on materials used in token/BP.

Anubis was one hauler constructed by Stormis Winner of Hyperion Ship built Contest "Mistress Hyperion" Name History "Anubis" is a Greek rendering of this god's Egyptian name. Before the Greeks arrived in Egypt, around the 7th century BC, the god was known as Anpu or Inpu. The root of the name in ancient Egyptian language means "a royal child." Inpu has a root to "inp," which means "to decay." The god was also known as "First of the Westerners," "Lord of the Sacred Land," "He Who is Upon his Sacred Mountain," "Ruler of the Nine Bows," "The Dog who Swallows Millions," "Master of Secrets," "He Who is in the Place of Embalming," and "Foremost of the Divine Booth." The positions that he had were also reflected in the titles he held such as "He Who Is upon His Mountain," "Lord of the Sacred Land," "Foremost of the Westerners," and "He Who Is in the Place of Embalming." In the Old Kingdom (c. 2686 BC – c. 2181 BC), the standard way of writing his name in hieroglyphs was composed of the sound signs inpw followed by a jackal over a ḥtp sign ::pos{0,2,8.6637,120.8858,27.6696} VR: Dark Lunar Corps Showroom *Statistics with lvl 4 flight talents

The Tonkor is an upgradeable atmo-only S Core hauler. With 8 Large Containers and 1,536kl of volume it can carry 2 kilotons in Alioth's atmosphere with no- or minimal piloting skills. When your skills or wallet are ready for space travel, the ship already has areas marked for the required elements. Just add them and go! Space Ready Part List: 5x Space Engine L, 12x Retro-rocket Brake L, 6x Space Fuel Tank M, 6x Vertical Booster L (replace the 6 flat hovers) SPACE CARGO: With Basic space engines and minimal piloting skills this ship can CAREFULLY take 700 tons to Alioth orbit. Adjust according to your piloting skills. SCANNER READY: There are 3 locations already marked with elevators pre-configured for a tri-scanner setup. You just need to add the scanners and you're good to go! Due to the terrible hitboxes on scanners, the forward scanner is a little finicky to place but it will fit once you find the spot. GENERAL UPGRADES: Upgrade atmo- and space- engines to Military variants for more power, or Maneuver for better fuel efficiency. Warp wasn't included in this design to keep costs low, but there is ample room to squeeze one in somewhere. You can always add more Wings/Ailerons if you feel you need more lift. Kiosk located 11km south of IC Spaceport - ::pos{0,2,2.8251,81.3320,45.2225}

A heavy-weight Freighter, supporting AGG technology and Warp capability, this is a no compromise mining support vessel. Rated for a base 3000T (1.0g), this ship will carry home, in one go, that precious meganode you found with its on-board Territory Scanner. It features a broad command bridge, with generous personal accommodation space over two levels behind. Be assured, this ship will dominate not only your mining site, but the market you take your spoils to as well. All stats are given with no placement and day 1 pilot talents - stats will only improve with talent training.