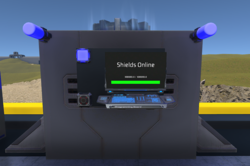 With the introduction to shield generators I did not want to have to get out of my command seat to turn my shield on and off if I was entering a PVP zone and needed it on. Since this game (currently) does not allow you to link a switch to your shield generator directly, and you need to go through a programming board, I decided to make a script that not only turns your shield on and off but also provides a monitor read out for shield status "Shield Active / Shield Idle" In addition to giving you a read out on a screen, it will also change the colors to any lights linked to the programming board as well. I have set up the blueprint to be DRM free so once deployed you can copy and paste off the programming board as many times as you wish. The light colors are all changeable within the Lua parameters I understand this opens this up to be essentially free after one person buys it and shares it but please do not over share as I do plan on putting more work into this once the new shield operations come to the live server from the PTS such as Venting and possibly on the fly shield defense configurations if possible. All the instructions for set up are on an info button on the blueprint once deployed. You do NEED to have at least one light, one screen and shield linked to the programming board to have this work. To purchase come to coordinates ::pos{0,2,23.7645,141.4707,99.6153} on Alioth To see the Lua in action please visit Bobs Pad in VR to get a hands on view of this in action *Updated to now show a health bar and shield health number read out as well as added a third screen read out to now show when shield is on but shield health is at 0 HP Free Updates for anyone who has previously purchased the LUA. If you can either show proof of the purchase with a screen shot of the dispenser log on your end or chat with me on Discord to meet up so I can manually change *update fixed a spelling error with word Depleted* Will fixe screen shot when I can take this back out to the testing field to get shot at. Any questions or issues please message me @ArmedBOB#6159 on Discord

The NoxCorp Ship Stat Screen V2 is an improved full LUA rewrite of the original HTML version. Screens that use the LUA API instead of HTML look sharper, render at greater distances and are significantly better for game performance. Version 2 brings much more customisation including: - Custom text and logo - Choice of text layouts - Choice of fonts - Change all colours, backgrounds and borders - Customise or switch off the star animation - Use custom backgrounds All customisation is done at the very top of the script, all settings have clear explanation and example values. The render cost is around 1 300 000 / 4 000 000 depending on content. The blueprint is provided DRM free which allows you to reuse infinitely. This is reflected in the cost. You can also transfer the money to me via your wallet in-game and I will paste the code to you on discord (no need to travel). 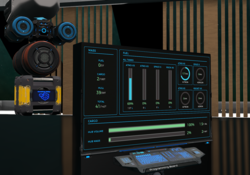 The first in a series labeled 'Equinox OS,' PsychoSlaughter of Equinox Consortium brings to you a fuel, hub, and ship mass monitor utilizing the latest in Lua screen tech. This adaptable monitoring solution will adjust to any fuel tank configuration from 1 to 12 tanks, adjusting the display to utilize screen space. In addition to keeping tabs on fuel, this screen will watch your cargo levels ensuring you don't overfill that hauler*. For further stats on your ship, a mass display separates the ship, fuel, and cargo weights for you to review. Bundle this all with easy installation, configurable colors, and custom limits per ship and you have the last monitoring solution you'll ever need! DRM free for you to use on all your ships. Shipbuilders: please leave DRM on when selling your constructs for this OS. Pickup the BP today at my showroom, Equinox Dynamics ::pos{0,2,34.6557,78.3264,246.7561} EASY INSTALL: 1. Deploy the monitor construct from blueprint 2. Right-click the programming board and select 'Copy Lua configuration to clipboard' 3. Place a new programming board on the target construct you want to add Equinox OS to 4. Right-click the programming board and select 'Paste Lua configuration from clipboard' 5. Right-click the programming board and edit the parameters to your specifications 6. Connect the core, hub, and minimum of one screen to the programming board *Cargo monitor supports one Container Hub only. Additional containers not connected to the single hub, or additional hubs, may throw off the calculations.

This project leverages the recently released screen LUA APIs to provide an interface with the programming board. With this system, you can set up a public drop off point for ore with requirements for each available ore, and set the system to show all tiers, or single tier at a time. https://github.com/jdelgado-dtlabs/DU-Ore-Manager 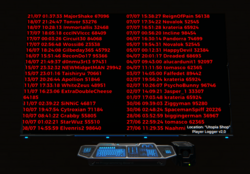 for the script go to https://github.com/Davemane42/DU-Scripts#player-logger-script Log player activity to a DataBank and render to a screen Support about 175 entry before you need to clear the DataBank Elements needed: 1x Programming board 1x Data Bank 1x Screen 1x Detection zone Instalation: 1. Copy the content of the link below and paste on a programming board https://raw.githubusercontent.com/Davemane42/DU-Scripts/master/PlayerLogger/PlayerLogger2.0.json 2. Connnect the board to the screen. 3. Then do the same for the data bank. 4. Connect the detection zone to the Programming Board. 5. Finnaly, hit ctrl+L while looking at the board and add your username in line 7 of unit->start() Activate the board manualy and type "help" in the lua chat for the command list 'clear' [clear the databank] 'dump latest/unknown' [dump the table as JSON in the screen HTML so you can copy it] 'remove latest/unknown indice' [remove an entry from one of the table] 'exit' [exit debug mode] 'help' display a list of commands Known Issue: Detection zone needs to be at least 3m away from the programing board for "ignoreKnown = false" to work 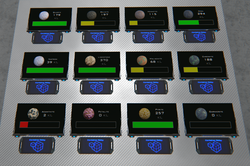 Reliably displays the amount of an ore in a single container. Features: - Doesn't use inventory APIs, no issues with refreshing - Simple installation and config - Colored fullness bar based on an amount to consider "full", unrelated to container size - Icons from in-game resource files Installation: 1. Download code from https://github.com/brendonh/du-lua/blob/main/ore-monitor/monitor.lua 2. Paste into a PB's unit.start 3. Link to a screen and a container or HUD (in either order) 4. Set ore name (e.g. "Coal") or pure name (e.g. "Carbon"). For T4+, add entries to config in script 5. Optionally link to a detection zone to refresh each time you come near

Open Source project, all sources available here : https://github.com/Jericho1060/du-storage-monitoring You can join me on Guilded for help or suggestions or requests by following that link : https://guilded.jericho1060.com It's displaying on screens the quantity and the percent fill of containers or hub. It can support up to 9 screens and chose what is display on each (group feature) To add a container to the system, you must rename it following that pattern: <prefix>_<itemName> For a Hub, you must use that pattern: <prefix>_<itemName>_<containserSize>_<amountOfContainers> <prefix>: the prefix that enable monitoring, by default MONIT, see options to customize it <itemName: the real item name in english <containerSize>: if a hub, the size of the containers linked (default to XS) <amountOfContainers>: if a hub, the amount of containers linked By default, the script is grouping all containers or hub that contains the same items on a single line and add the values. See option if you want to disable it. By default, the list is sorted by item tier and then by name

A simple HUD for monitoring and managing industry in Dual Universe Open source project, all sources available here : https://github.com/Jericho1060/DU-Industry-HUD You can join me on Guilded for help or suggestions or requests by following that link : https://guilded.jericho1060.com Feature list: - display all your industry status from a single programming board with only one link to the core - Add other boards to remote control all your machines (start/stop/batch/maintain) - easy locate your machine with arrows displayed around when selected on the HUD - fully controlled with Keyboard and can type setted value directly with your keyboard

Essentially, this script provides an AR overlay to your world to view waypoints you have set with Archaegeo's script, in addition to the planets around you. Like all AR scripts made with the AR projection library, there are specific conditions under which this script functions correctly. If you are on a planet, assuming you aren't in a cockpit in another ship, the script should function flawlessly. It will only work in a seat on the construct the programming board was deployed in, and only if you correctly calibrate said seat, assuming you have "freelook" enabled. What freelook enables is a way to track where your camera is looking purely based on your mouse movement. Of course, this comes with one major downside: it won't work in the third person. Nor will it work if you don't calibrate your pitch and heading. Calibration takes place in the form of looking either up or down, pushing your mouse past the limit you can look and then looking either left or right. The accuracy is around 1 degree when looking straight on if the calibration was done properly. (Inaccuracy is purely a result of the mouse capture not being absolutely perfect) In space, as long as you are on the ship the programming board was activated on, it should function for both in a seat, walking around and jetpacking. Note that for walking around, you need to calibrate your pitch. There are a couple more settings to change around if you want to. However, that is about all you need to know. To use the script, copy the JSON file contents found in the link below and select something like "paste Lua script" using a programming board. Connect the programming board to the core, and activate! If you have some saved waypoints using Archaegeo's script, connect the databank to it, and it should load his script's waypoints as well. Link: https://github.com/Archaegeo/Archaegeo-Orbital-Hud/blob/v1.401/SolarSystem.json Disclaimer: I coded this, however, Archaegeo provided the idea, hence when starting the script he is credited and hosts the script. 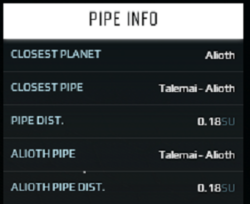 A simple script that creates a widget with nearest pipe and nearest alioth pipe and distance to those pipes. https://github.com/tiramon/du_pipe_distance_widget

A visual representation of your ship distance from the warp tunnel between two planets. Fly safe during your missions! Script and presentation here : https://github.com/rhoffsch42/DualUniverse-public/tree/master/safe_travel_infos

The original DU Orbital HUD/ButtonsHUD/DimHUD - A full autopilot and HUD suite. It is on stable version 5.453 at current, and no further updates are planned. For a more fully-featured Autopilot/HUD (but potentially less stable), check out ArchHUD https://github.com/Dimencia/DU-Orbital-Hud Support is provided at the Open Source Initiative Discord, dual.sh/osin, in the #tech-support channel