The ultimate atmospheric hauler! This fantastic-looking ship is capable of making hundreds of short trips and is perfect for grabbing ore from your nearby mining hexes or making a flight to the closest market. It includes a custom computer system that shows cargo, and lets you know when low on fuel or loaded with lots of weight. The matrix-style screen saver is great eye-candy too. The massive fuel tanks are a key feature for this ship, making it a great hauler for many-stop missions. For a full rundown on this ship, check out Neocrypter's review on YouTube. https://youtu.be/dYHjlfuDGTo See it at the Tyr exhibit at Loaded's Showroom (VR: loaded industries showroom in the NW corner). 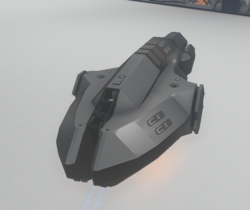 Looks good and is cheap to fly! This luxury warp shuttle is the best way to move passengers around Helios. This stylish warp ship includes ample room for 4 passengers and a pilot. It includes a light selection script and other warp relevant Lua. Get to the farther reaches of the galaxy with few warp cells-- 11 cells per 500su. It also includes special vertical engines to help get you up and out to space (no slow annoying exit here). See it at the Tyr exhibition at Loaded's Showroom (VR: loaded industries showroom in the NW corner). Right now we're offering all color upgrades to the forcefields for no charge.

This ultimate pocket ship is made with incredible detail and advanced voxelmancy. This special ship includes easy-to-customize image banners along the sides. Get yours today and Rex will help you get a perfect banner for your tastes. Features: Custom Banner Images Check it out at the Tyr guest exhibition at Loaded Industries Showroom (VR: loaded industries showroom) in the NW corner. You've seen this one around? Tyr members are gifted tokens of this ship! 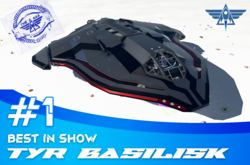 Very versatile ship, it adapts to all needs and contains a left lading pad inside to carry ship for raids, expeditions, or explorations. The dashboard is provided by the excellent autopilot "Sagacious Autopilota v2 with three interactive routes and navigation, antigravity and keeps fuel under control! The ship is equipped with a tactical room located in the heart of the ship for any risky maneuvers or pvp for a more protected player position !! All for only 10,000,000 for a blueprints !! The position alioth :: pos {0,2,48.2963,82.3821,37.1429}

The newest addition to the Underdun Arcade. Based on the classic Boulder Dash, on the Commodore and Amiga. Featuring all 20 original levels! ::pos{0,2,22.1186,116.2464,134.1995} ** RULES ** Move your character with the arrow keys. You can dig through dirt, and push boulders. Collect as many coins as specified in each level, at the loading screen, within the time limit. Once you have enough, the game background changes, and the Exit opens up. Gathering more coins than needed, grants extra quanta. Collecting 500 quanta worth of coins, grants an extra life (you start with 3). Coins and boulders roll off each other, and off walls. If they land on your head, you die. You can safely dig under a stationary boulder. Butterflies and Fireflies kill you on touch. Drop a boulder on them to kill them. Butterflies generate coins when they explode. Fireflies do not. Amoeba spreads like a virus through the level. It kills Butterflies and Fireflies, but it only blocks the player. If it grows too large, it will turn into boulders. Encasing the Amoeba using boulders, coins or the player so it can't grow, turns it into coins. The Magic Wall turns boulders into coins and vice versa. Activate it by dropping a boulder on it. It has a set time limit. CTRL+F9 hides your UI so it's easier to see the game. Type "kill" in the LUA chat if you get stuck. You can choose to start on any of the 20 levels, by typing "level <number>" in the LUA chat.

Space only asteroid hauler ready to drain for a long days work of asteroid mining. Light weight simple design, easy access to DSAT. 3 large containers for cargo and 3 smalls for the warpcells and scrap 2 Uncommon Military space Xl's and 4 Advanced Military space engines for plenty of power @ 14.9g's Currently only a safe space version could be easily converted to pvp space needs if desired upon commission. Vr over to Broken Skull SS to check it out.

A pleasant-looking and quite functional ship The recommended crew of the ship is 4 people: 1) pilot, 2) shooter, 3) navigator, 4) mechanic. Also, a technical specialist of the transported cargo may be present on the ship, the necessary equipment is available for this. This ship has a system of protection against pirate attacks: 1) 4 guns (2 in front and 2 in the rear), 2) shield generator. The control cabin of the ship is protected by additional force fields activated with a button. VR "Molotoglav" Position (::pos{0,2,6.8880,152.3365,267.2064}) 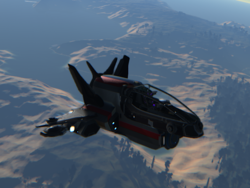 Flyte MkII is a fast and easy to fly atmospheric vehicle that is great for a variety of tasks within planetary atmosphere. This ship is fast to lift off and easy to land making it a great choice for new players or anyone who struggles to fly atmospheric ships. This ship flies very well and is great for circling crowded landing pads to find a good landing spot. Also a great site seeing or touring craft as it can circle an area at low speed without losing lift. Blueprints of the Flyte MkII are free (1h) and full ship is only 200kh so this ship is within reach even for new players. Includes your first tank of fuel for free! The Flyte MkII is compactible meaning you can put this ship in your pocket and take it with you anywhere! This feature however means cargo space on this ship is non-existent. Even without cargo space, this ship can lift up to 3 times its own weight so fill up your nanopack and you are still good to go! Ship Weight: ~10 tons Weight Capacity: ~30 tons No stacked or overlapping elements so this ship is ready for the coming stacking changes in game. Come and get yours today! 34km from Alioth Market 6 ::pos{0,2,24.2374,112.8746,-0.0002}

Nash Industries first ship, the NI Hawk! This is a light, fast and maneuverable small XS core ship without cargo capacity, instead intended for fast (and fun) travel in atmosphere. - Advanced Military Engines - Max Speed: 1,800 km/h - Comes pre-installed with Arch HUD The Cockpit and Databank are both DRM free so that you can use any HUD you wish. VR to Nash Industries Showroom to view (please excuse our mess as the showroom is still being built).

S Core hybrid hauler with a single Large Container. Low cross section, solid handling, and cheap parts make this a good starter ship or a light market runner. Haul 400T to orbit in relative comfort. Adjust the weight based on your skills, buffs, patience, and guts. Pricing the BP at one day's pay so new players can get into one easier. If you're a new player reading this: DON'T BUY UEF SHIPS! They're hot garbage. Dispenser located at Anvil Speedway - ::pos{0,2,-4.7451,94.8747,7.0440} Viewable in VR at "Anvilworks Speedway The Dunes"

Heavy Hauler . Tested the Ship to lift 45 Kt off a 0.5 G planet Without activating the AGG 20 XL Expanded Containers M Agg Interior Design Shield I designed the ship With mission Hauling in mind but can be used for other Features. Also have room for future Upgrades if need. Also tested after the new patch and have no warnings for any element problems as she was designed with the updates in mind. VR Dragons Gaming Sales

The "Void Titan S" is build to Haul Ore, do Marked run´s or deliver Packages in Missions. You can also eqip it with a Dsat to scan for Asteroid´s. With 4 L Container you can do the Alioth -- > Madis/Thadis Mission with up to 4 Char´s with this configuration. It comes with Military Atmo Engines to get you out of Atmo and Maneuver Space Engines to safe on the Fuel bill to max out your profit on those Missions. It also comes with 2 "Oh Shit" Advanced Military Space Engines to shorten your braking distance in need. 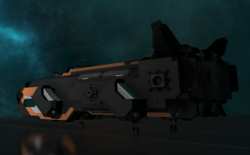 This is the first ship I've designed in Dual Universe. It is a warp capable shuttle able to ferry one passenger and 2800L of material anywhere in system. Depending on what you are moving in the cargo space, each jump up to 500 SU takes anywhere from 8 (empty) to 11 (full) warp cells. The Syrtis was designed to be able to shuttle myself places in style. One goal in designing this was to be affordable and offer a cheap shuttle for Novians. At the moment, the token comes with Adv Military Engines all around. These can be changed at request. Contact Razzy in game or Razzy#2357 for purchase and transport. Transportation fees are only warp cell cost.