The Medium variant of the Ugly Duckling. BP is available only at this time for the low cost of 5000 quanta, that's what it costs me to create the BP. This is also a DRM free bp, Open Source, so you can modify and should be able to create your own BP's afterwards. I had a lot of help from the community when I started, this is my way of giving back. It's an ugly ship, no voxels at all, so you can design how it looks if you want. I tested it on Aliothe with 150T of cargo and made it to space with no skills and no enhancements to the engines, etc. With pilot skills you can do better. It's an S core designed for the beginner and to grow with you. It has a medium cargo container. If you want to max out the carrying capacity, add more engines, wings, thrusters, etc. With no Voxels, you can move parts around with ease and experiment, learn and improve upon the ship. Want to go faster, add more engines :) Feel free to give me feedback on it or ask any questions. Buy a blueprint at GTF City - ::pos{0,2,-8.9075,115.3199,18.4796} - paste into chat, right click and set destination for most accurate positioning Contact me on discord if you have any questions - wokka#4615 Element list : Adjustor M - 12 Atmospheric airbrake M - 30 Atmospheric fuel tank M - 2 Basic Atmospheric Engine L - 4 Basic Space Engine M - 6 Command Seat Controller - 1 Container M - 1 Dynamic core unit S - 1 Flat hover engine L - 2 Hover engine M - 4 Retro-rocket brake M - 12 Space fuel tank M - 2 Stabilizer M - 2 Vertical booster M - 4 Wing M - 10 Of note, the Dimencia DU Orbital HUD is installed, it's great and easy to use. Go read up on the instructions on how to use it here : https://github.com/Dimencia/DU-Orbital-Hud

The party train is an atmo only train that can carry 18 passengers at 1800 in atmo. Great ship for tours and transports for events. All Blueprints and Tokenized Ships located on Alioth at Castle D4rkMoon ::pos{0,2,54.0664,95.5401,583.6151} All stats are as boosted with lvl 3 skills. If you boost them higher it will be better. Tokenized ships will all be boosted at lvl 5 skills across the board

Khartu-Al : Armored mission/asteroid runner or 2-seater PVP or hull only

Designed in the style of the Khartu-Al from the not yet released game Star Citizen. This ship comes in an armed and non armed model and can fulfill following roles: - Armored mission hauler - Armored asteroid hauler - 2 seater PVP ship (railguns by default) The ship has following features: - Cockpit inside an 11-voxel thick orb, with room for 3 seats - 4000m³ of steel Honeycomb - Below stats are based on lvl4 skills and uncommon military XL engines, so further increase of stats is possible. - Narrow but navigable interior with elevators that allow teleportation to within repair range of all guns. - 16G thrust while unloaded, 11G thrust when loaded, red coloured voxels for added speed - Space only, room for 6 railguns, 2 L-containers, 6 XL-ammo containers, L-Shield, 3 seats, 3 L-radars, 2 L-space fuel tanks, warp core Blueprint: 20mil Token: on request (subject to market price) How To Buy: - Visit by VR to: The LaLiLuLeLo Ship Shop - Travel to new location in Atlantis City at ::pos{0,2,40.7468,1.1600,1212.4482} - Contact me on discord: taishiryu#6188

The Merlin is a specialised cousin to the Sparrow, designed to provide all players with a lightweight warp capable ship while remaining within the XS core selection and still providing a comfortable enclosed piloting area. Included is our new proprietory lightweight Flight Operating System, the FireOS, to provide new and veteran players alike with more control, quality of life options, and safeguards to ensure you have the most comfortable and stress-free ride of your life! No complex ArchHud needed! Able to carry just 6,000 litres, and 90 tonnes of cargo safely into space and away from alioth, this small but powerful ship is more than up to the task of getitng you from A to B quickly. And with a cost of just 13 warp cells from Alioth to Lacobus on full fuel tanks, you can relax about dashing around the solar system! Taking a friend along? No problem! With plenty of seat to accommodate a small party of friends, this stawlwart ship will get your crew to where ever you need. Please note: Performance readings provided with Level 5 placement Talents applied. Talent application service provided for 5,000,000ħ on any SWARM design ships. Nearly ALL elements are accessable from within the ship, reducing the maneuver time to repair important flight elements. VR: SWARM Flotilla Shop

Whether you simply want to see the sights, or defend the skies, the Raven series has you covered. With 4 variations to choose from, plus customization options, you can make the Raven you fly your very own. **Raven, Raven P, and Raven C now offered in non-cockpit versions. Raven - 750,000 This base is the foundation of the Raven series. With a sleek carbon fiber body and powerful thrust capabilities, you can get to where you're going fast and look good doing it. Along with incredible atmospheric performance, it's space capabilities make it great for traversing from planet to moons. Raven C - 900,000 The Raven C is the cargo variant of the Raven. With the use of 2 XS cargo containers and an easy access container relay, you can count on it for whatever light hauling you need to do, whether it's transferring things from base to base or simply picking up purchases from the market. Raven A - 1,500,000 The Raven A is the assault variation of the Raven, and the most customizable of the series. The carbon fiber body has been replaced with steel, allowing it to take a beating IF they can hit you. This agile fighter is designed for "in-and-out" strikes and perfect for supporting larger craft. Coming base with a small space radar and 2 XS Cannons, it can be customized for atmospheric radar, or changing out the dual cannons for 1 Railgun, 1 Laser, or 1 Missile Launcher. Raven P - 500,000 Ever wish you could carry a ship in your pocket? Well now you can! The Raven P is the atmosphere only version of the Raven, but losing it's space capabilities makes it compactible. Be careful though, just because it doesn't have space engines doesn't mean it's not powerful enough to reach space, care should be taken when flying to high atmosphere at high speeds to not accidentally go in to space.

My version of a Star Citizen Caterpillar remake. Brake power is a little overkill but better safe than sorry. Right now it have 2 Large Containers. Contact Pheenx#8868 on Discord to purchase. Store at Alioth coords: coming soon

The ship is not for sale only for show! 5kt hauler with repair unit, scanner, warp hybrid space/atmo 3D system map with system and cell needed for warp travel Author: UnderVerse Diskord: Kevadonis#2912 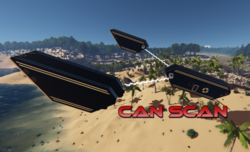 **Check Out Our New Can Scan Max!** https://du-creators.org/makers/iNFiDeL%20Inc./ship/Can%20Scan%20Max Hundreds of devoted development hours and thousands upon thousands of scans have allowed us here at iNFiDeL Inc. to develop the fastest and most efficient passive triple scanner in DU. With an emphasis on speed and maneuverability, you can finish one triple scan and already be scanning another site in less than 1 minute as seen in this youtube speed test! https://youtu.be/s-_O5RHlkDs Quit wasting time between scans, whether you are watching movies, studying or playing other games while scanning, no one likes to waste time, its your most valuable resource so spend it wisely. The Can Scan utilizes Advanced Maneuver engines, elevators, carefully placed scanners and widely spaced pods to streamline the scanning process. Enough with the maneuver tooling and sprinting from scanner to scanner, get your Can Scan today! ** Don't scan while working or studying? No worries for a more active scanning option be sure to check out our friends in SLI's Hammerhead Logistics Platform, arguably the best multi triple scan option in the game!** Check It Out Today! VR: Atlas Museum ::pos{0,2,49.8920,29.9000,4.3693} BP Sold Via Dispenser On Site / For Tokens DM: iNFiDeL#7187 ***NOTICE*** To Utilize Max Handling Displayed Below On BP, Deploy BP While In VR Only! This Insures Your Skills Do Not Disrupt The BP Skills. ***NOTICE*** Max Handling: lvl 5 atmo thrust (+50 atmo thrust) lvl 5 space thrust (+50% space thrust) lvl 5 airfoils (+25% high altitude lift) lvl 5 container proficiency (+50% cargo volume) lvl 5 container optimization (-25% cargo mass) lvl 5 vertical booster (+50% power) lvl 5 adjustors (+25% power) lvl 5 atmo fuel tank volume (+100% fuel storage) lvl 5 space fuel tank volume (+100% fuel storage) lvl 5 fuel optimization (-25% fuel mass) lvl 5 atmo element handling (+10% power to: atmo engines, hover engines and airfoils) lvl 5 flight element handling (+10% power to: retro-engines, airbrakes and adjustors) lvl 5 space element handling (+10% power to: space engines and vertical boosters) lvl 5 airbrakes (+50% power) lvl 5 retro-engines [space brakes] (+50% power)

Atrocity of Flight By BDC 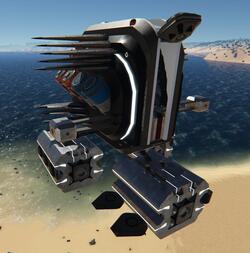 **Atrocity of Flight** What can I say this ship speaks for itself. Name alone says alot but dont let that fool you this is a work horse. I had few easy goals XS Core, New Placement for Fuel Tanks, 1KT Total off Ailoth, NOT A BOX! I took 823T untill I got a purple escape route stopped and came home to safely land at base. MY SKILLS are LVL 4 Everything. Come grab ya one. VR Station name "BooNDocK Main Showroom" ::pos{0,2,-25.9879,106.3613,5.8710} IGN: xSKeeVx OR Discord: Skeev#3940 Contact me for possible trades in partial payment. Willing to Barter ORE's or Component's. 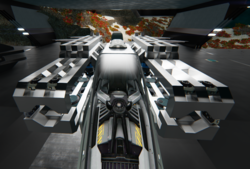 RP-10 Is the first of its line. XS ship small enough to fly around cities. Simple 1 seater transportation Max speed is 750-800 On alioth, not tested on other planets. No containers on board. Atmo only BP - 300k Token - 600k

This is a small atmo only flyer, it can be docked to a MEX freighter and is very fuel efficient